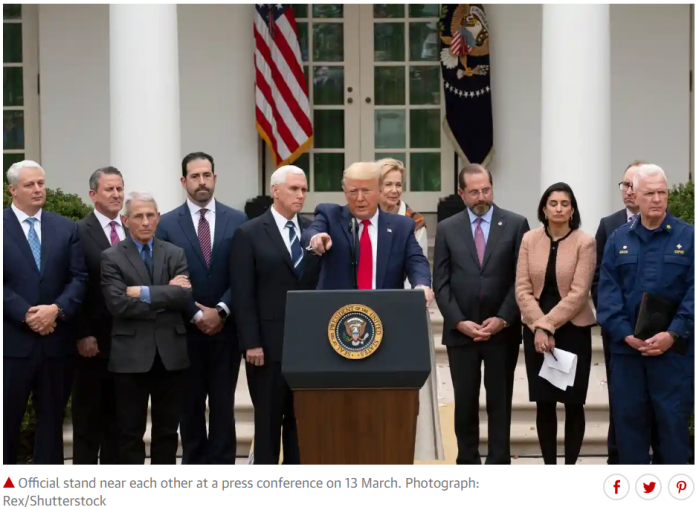 Are “Swing States” infections the best indicator of Trump’s next move?

The US has surpassed both China and Italy and therefore now has the world’s highest number of corona cases. Europe continues to look fragile, while Sweden posted its biggest daily increase of new infections.

After new US corona cases surged by more than 17,000 yesterday (highest daily increase so far), the US has surpassed both China and Italy and now is the nation in the world with most infected. Moreover, the number of US persons in critical conditions spiked by 38%, sending an unpleasant warning of an upcoming acceleration in fatalities per million (see table 1). With the US now having the most corona cases in the world, this should put more pressure on Trump to pursue a more aggressive lock-down strategy. So far Trump’s message has, however, been that “we can’t have the cure be worse than the problem”. But why is that the message and what could change it?

Allow us to take on our more cynical hat for a bit. When digging into the US numbers, it is clear that New York is the epicentre of the corona outbreak which should be of highly concern for any sitting President. However, Trump got smashed by Hillary Clinton in the 2016 Presidential Election and most analysts agree that Trump does not stand a chance in the 2020 New York Presidential Election either. In other words, why should Trump focus on New York if his (only) goal is a re-election (very cynical, we know).

Instead, Trump-land is in the Midwest. Here, the virus has not really taken its toll yet, but these states will nonetheless feel the economic pain (did you by the way see the jobless claims number yesterday?). By extending the partial lockdown it will thus only create an even deeper US recession and as history has told us, no incumbent president has ever been re-elected with a recession in an election year. I.e. Trump is determined on not “making the cure bigger than the problem”

What could change the President’s mind, however, is an increasing number of corona cases in the Midwest. While New York remains the corona epicentre, its “relative importance” is decreasing, accounting now for “only” ~45% of the US cases compared to ~74% a week ago. Hence, the virus has accelerated relatively more elsewhere and may also soon become a real healthcare threat in Trump-land.

In our view, the key measure in terms of Trump’s next strategy move is therefore corona cases in swing states – especially, in the Midwest such as Michigan, Ohio, Wisconsin and Minnesota (see chart below). Currently, the number is low, but if we were to see a sharp acceleration in the next week or so, this could perhaps change Trump’s Easter non-lockdown plan.

Chart of the day. New York is the epicentre of the US corona outbreak, but it is getting less significant from a relative perspective. Are swing states the key for Trump’s corona strategy? Turning to the Nordics, Sweden posted its highest daily increase of new cases yesterday, just like Norway did on Wednesday. Norway though still has the far most cases in the Nordics, which probably can be attributed to its relative world-leading position in testing (see chart below). Denmark hopes to do some catching-up on this front in the coming period as the government made a U-turn this week, now also wanting a more aggressive testing strategy.

Chart 2. Norway is one of the most corona testing countries in the world (per million citizen) On the gauge of fatalities per million, Denmark still has the highest number (~7.3), although Sweden is getting close. Finland’s fatality numbers continue to look fairly low (as Finland does on most measures). Chart 4. Fatalities per million citizens in the Nordics