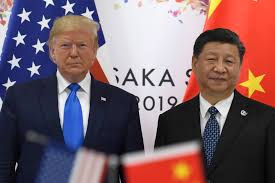 China and US sign trade deal easing trade tensions
Chinese Vice Premier Liu He and US President Donald Trump signed the China-US phase one economic and trade agreement at the White House in Washington on 15 January. The phase one trade deal specifies some structural changes to China’s economic and trade regime in the areas of intellectual property, technology transfer, agriculture, financial services, and currency.

The trade deal also includes commitments by China to make substantial additional purchases of US goods and services in the coming years. The pact will enter into force 30 days after signing. The full trade agreement could be read here (in English). .

The deal signed on 15 January makes no mention of further removal of US tariffs on Chinese goods, although during the negotiation process of the deal the US administration agreed to cancel the proposed 15% additional tariffs on about US$160 billion of Chinese goods scheduled on 15 December last year, and cut the tariff rate to 7.5% from 15% on another US$120 billion of Chinese products, which will be effective on 14 February.

However, Trump said that the remaining tariffs on chinese imports ‘will all come off’ if the subsequent phases of trade negotiations produce a second agreement. Those talks are expected to begin soon but might not conclude until after the US presidential election in November.