“The eurozone economy picked up further
momentum in June, with the headline PMI rising
from the lows seen earlier in the year to hint that
the worst of the current slowdown may be behind
us. However, the overall rate of expansion remains
weak, with the survey data indicative of eurozone
growth of just over 0.2% in the second quarter.
“However, growth trends between the core and the
periphery have widened. Germany and France are
both showing improved performances compared to
earlier in the year as one-off factors (such as the
political unrest in France) continue to drop out of
the picture, but the data highlight a growing concern
that the rest of the region is sliding closer towards
stagnation.
“Growth also remains very much dependent on the
service sector, which in turn largely reflects the
relative strength of domestic consumer demand
and improving labour markets. Manufacturing, in
contrast, remains in a steep downturn which is only
showing tentative signs of moderating.
“The overall rate of growth consequently remains
subdued, and a further deterioration in business
confidence about the year ahead suggests the pace
of expansion will continue to be restrained by
uncertainty and risk aversion. Concerns about
weaker economic growth at home and in export
markets, rising geopolitical risks and trade wars
continue to dominate the picture and dampen
business spending, investment and sentiment.” 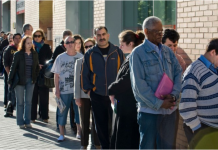