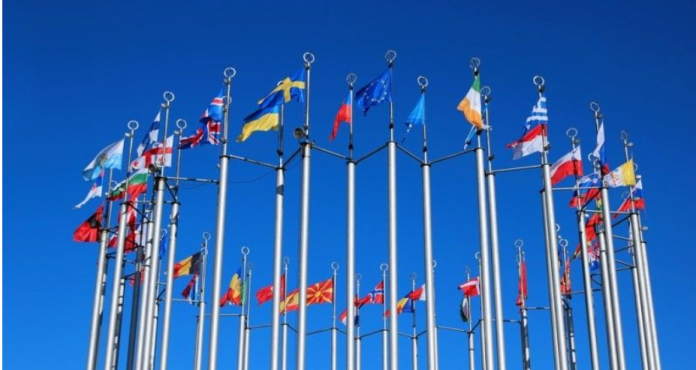 FX weekly: How to glue together the EUR-ship again?

Tourism may be the most important redistribution mechanism in the Euro area, which leaves a tough task ahead for the Eurogroup. $ remains strong and a rebound in global trade is probably the last piece missing in the puzzle before the $ can weaken.

If you want to receive a copy of FX weekly directly in your inbox, you can sign up via this link.

Quote of the week

“I am sure the euro will oblige us to introduce a new set of economic policy instruments. It is politically impossible to propose that now. But some day there will be a crisis and new instruments will be created.” Romano Prodi just before year 2000

The Eurogroup still struggles to find a common footing and we are yet to be convinced of a sudden consensus emerging at the meeting next week. One of the reasons why the EUR is still afloat (and strong) is the natural money transfer that occurs within the Euro area due to tourism. Northern Europeans spend much more money in Southern Europe than vice versa, which is an indirect way of distributing wealth within the Euro area.

Our current working assumption is that borders will remain at least semi-closed throughout 2020 as the strategy in many northern European countries cannot cope with external virus spread. E.g. Norway and Germany actively pursue <1 in the R0 (the virus spread per corona patient), which makes it difficult to open borders to countries with a less draconian strategy without implementing at least 14 days of quarantine to everyone arriving.

Should isolationism persist for longer than anticipated (we clearly lean that way), it likely also means countries/regions that have tended to save in recent decades, may be the relative FX winners (but not the relative wealth winners). With extended lockdowns and border closures, extended massive budget deficits will follow. Those who have saved for years (both via the current account and via the fiscal budget) may eventually have the smallest money printing need, since they can “tap into savings”. Germany, Denmark, Norway, and the likes are examples of such, while UK, Italy and US are examples of countries with double deficits and big printing needs. The situation is of course complicated within the Euro zone since different parts of the Euro zone have had differing savings over the past two decades to say it the least.

Whether the EUR will gain (as it should due to the CA surplus in the current situation) depends on Germanys willingness to accept widespread politically dictated wealth transfers within the Euro area. Boris Johnsons administration’s “threat” not to prolong the negotiation period with the EU has to be seen as bullshit in the midst of this crisis. The Euro group will be busy gluing together the EUR-ship through 2020, why they will not be able to set aside the time needed to negotiate a deal with the UK. Maybe this is counterintuitively what the market is discounting in the stronger GBP now. EU for longer.

Chart 1: Remember that the EUR is already strong from a trade weighted perspective as it should be with a big German current account surplus 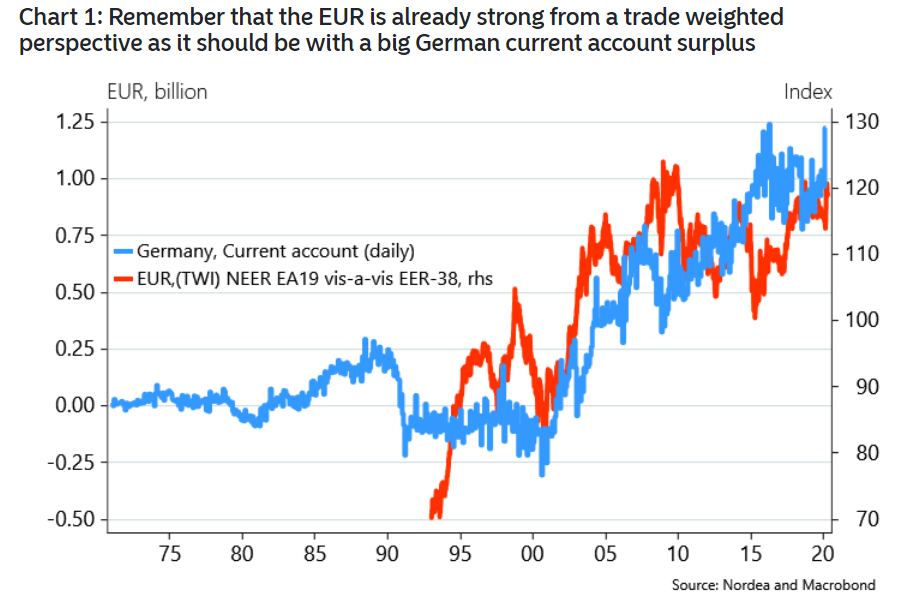 Since tourism is basically the current most important redistribution mechanism within the Euro area as Spain, Portugal, Greece and Italy have almost 20% of GDP stemming from tourism on average (with a large portion of that coming from Northern European tourism), this is a major issue that the Eurogroup will eventually have to deal with, if we are right that borders will remain semi-closed throughout 2020. It has not yet turned into a EUR-issue, and we hope that it doesn’t, but it will require timely money transfers within the Euro area and usually the Eurogroup don’t take such decisions until there is a major leak. This is a reason to be skeptical on the scope of EUR/USD upside potential (and a reason to expect semi-wide intra-EUR spreads), even if all the USD printing eventually filters through to a weaker USD as we anticipate. This also means that you will probably find better currencies to short USD against than the EUR, once the weakening trend starts. AUD could be a decent guess (after having been on a positive CA trend for a while), since China may help Australia rebound – but it is simply too early to buy into that story.