The U.S. as the World’s Earnings Locomotive

The strength of the U.S. economy—with real GDP rising at an annualized rate of 6.4% in the
first quarter of 2021—is not only considered a seismic tailwind for U.S. corporate earnings.
It also represents a powerful blast to global earnings, notably among firms in key developed
markets like France, Germany and the United Kingdom.

While we continue to prefer U.S. Equities relative to the rest of the world, we continue to monitor investment opportunities abroad, notably in the context of the U.S. being the world’s locomotive for earnings.

“What’s good for America is good for blue-chip Europe”, with roughly one-fifth of the earnings of the Euro Stoxx 50 leveraged to the United States.

Germany is even more leveraged to the United States, with America accounting for roughly
23% of German global earnings. Ditto for France (20%), the United Kingdom (24.7%) and
Denmark (27%). Over 30% of Swiss and Irish earnings emanate from the U.S., while
Corporate Spain and Italy, in contrast, are more local than their European counterparts.

Asia’s earnings are also more local or domestic, although the U.S. still ranks as the second most important market for corporate earnings in such economies as India, Japan and South
Korea. Corporate Taiwan is just as leveraged to the U.S. as many Europe firms. Brazilian and
Mexican firms are similar to Europe’s Mediterranean cohorts—or more dependent on
domestic variables as opposed to global dynamics.

British and Dutch U.S. affiliates are even more geared to doing business locally versus exporting, with a ratio of sales/exports of 10.5 for the U.K. and 12.6 for the Netherlands. And while Japan and
South Korea are among the top exporting countries in the world, note that when it comes to
accessing the U.S. market, the preferred option is through U.S. affiliates, not trade.

As an aside, in most cases, foreign direct investment and trade are compliments, not
substitutes, with one (investment) pulling the other (trade). To this point, and reflecting the
tight linkages between European parent companies and their U.S. affiliates, roughly 63% of
U.S. imports from the European Union consist of related-party trade, or cross-border trade
that stays within the ambit of the company. Think BMW Germany sending parts and
components to its U.S. foreign affiliate in South Carolina, as an example.

All of the above reflects the fact that the U.S. economy is among the most open and
competitive in the world, and therefore among the most attractive markets to foreign
multinationals. Indeed, America is exceptional when it comes to attracting foreign direct
investment (FDI), with total U.S. inward FDI stock amounting to $9.5 trillion in 2019 (Exhibit
3).

The comparable figure for China—$1.8 trillion—is much smaller and reflects the closed
economy of China and limited investment opportunities in the Middle Kingdom. In the
aggregate, 26% of total world FDI inward stock is sunk in the United States—a dynamic that
is mutually beneficial to both foreign multinationals and the U.S. 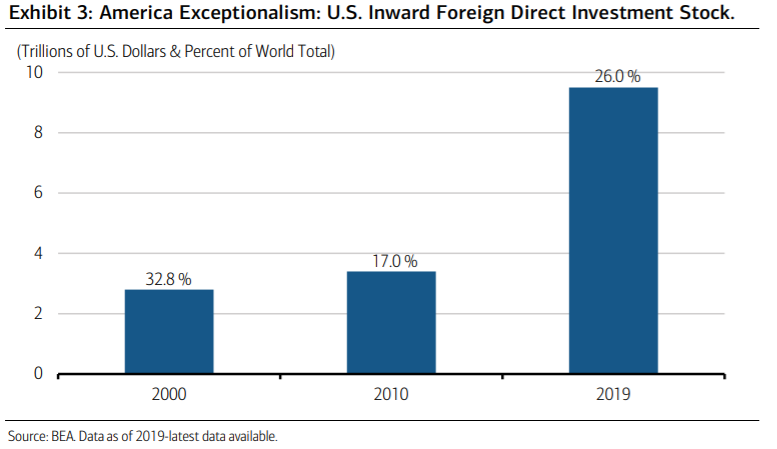 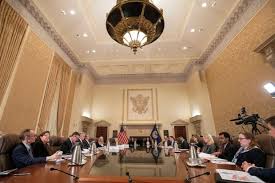