Global new cases have increased by 8.8 per cent over the last 24 hours, with
overall cases now over 785,000, but we continue to see significant slowing
across the most heavily impacted regions around the world. Today was the
second day in a row that global new case growth was under 10 per cent after
being well above for most of the last two weeks.

Italy now has over 100,000 cases and 11,000 covid-19 deaths, but growth
rates of both metrics have been flattening over the past week. Over the last
24 hours, Italian cases have grown by 4.1 per cent or about 4,000 people,
this is the lowest number of new cases in 13 days. Fatalities are also
trending lower, with a second day of 7.5 per cent growth, and four out of five
days in single digits now. Importantly, even as numbers start to dramatically
improve, the country is set to keep containment measures in place through
to at least the end of Easter in two weeks’ time.

The other European hot spot Spain, saw total confirmed cases pass China
over the past 24 hours (up to almost 88,000 cases). Yet like Italy, Spain has
now seen their metrics improve considerably after the lagged impact of
containment measures that were implemented two weeks back. Spain’s
new case growth went from 35 per cent three weeks ago, to averaging 20
per cent over the past two weeks, and has now dropped to single digits over
the last two days.

In Germany, new cases have increased by 7.1 per cent. Like Spain, this is
the second day in a row of single digit growth for the country, which would
be a fairly large deviation from the mid-teen range that case growth had
been in the previous 8 days.

The US continues to see new case numbers increase as testing increases.
It now has nearly double the reported cases that China has seen. However,
growth rates are also starting to show signs of slowing. New cases have
grown by 14.5 per cent over the last day, which is the second lowest daily
growth since the outbreak hit 100 cases. The growth rate of fatalities in the
country seems to have spiked higher to 27 per cent after falling sharply from
30 per cent to 12 per cent on Sunday, however the two-day average of 19
per cent is less than half the previous five-day average of 32 per cent.

Elsewhere, we have started to track Sweden as they have adopted a very
different and more relaxed stance to the outbreak. Schools are still sitting
and restaurants are still open for example. At the moment the table shows
that they are not suffering any more than those above it in terms of new
cases/ fatality rates. Time will tell if this proves to be a sustainable strategy. 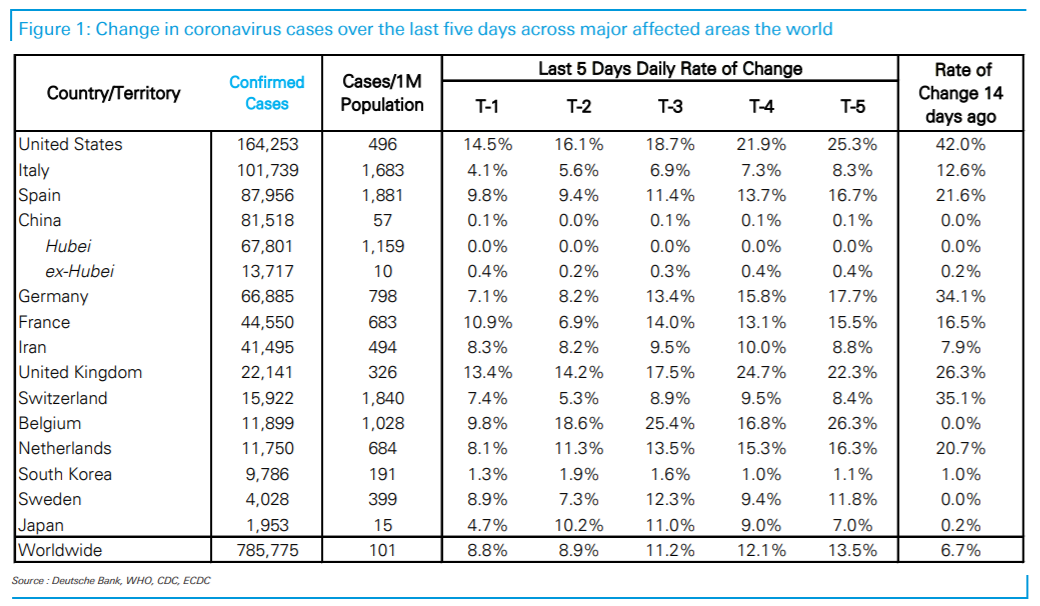