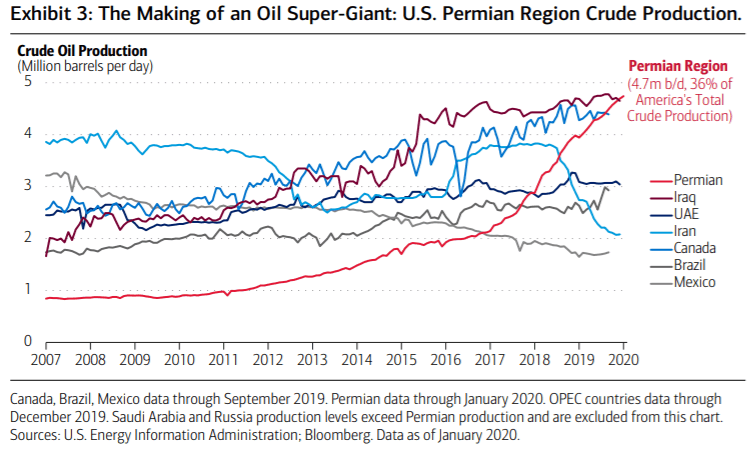 The Permian: A Golden Oldie
Of the fifty states in the Union, a total of thirty-one produce oil, but no one does it better
than Texas. The state produced 5.3 million b/d of crude oil in October 2019, well ahead
of second place North Dakota. On a standalone basis, Texas ranks as the third largest oil
producer in the world, owing in large part to the thriving Permian Basin, which not only
accounts for over 60% of total Texas crude oil output but also outproduces OPEC members
like Iraq, UAE and Iran, and Latin American producers Brazil and Mexico.

That’s a startling spike in production, but, according to industry estimates, there’s more
oil to come. Aggregate production has been held back in recent years by infrastructure
bottlenecks (notably the lack of pipelines), although these impediments to production are
being alleviated by more investment spending on roads, pipelines and related items. The
upshot: Output from the Permian is expected to continue climbing over the next decade,
with some industry analysts expecting output to top 8 million b/d by 2023.

At the forefront of America’s rising energy independence,
the 100-year-old oil producing field now accounts for over 36% of total U.S. crude oil
production, roughly double the share (18.1%) in 2013.

And as the Permian goes, so goes U.S. jobs, incomes and, notably, exports. Thanks in
part to the boost in Permian production, America’s trade in energy has been dramatically
reconfigured. In September 2019, the U.S. exported more
petroleum (89,000 barrels more) than it imported for the first time in history.